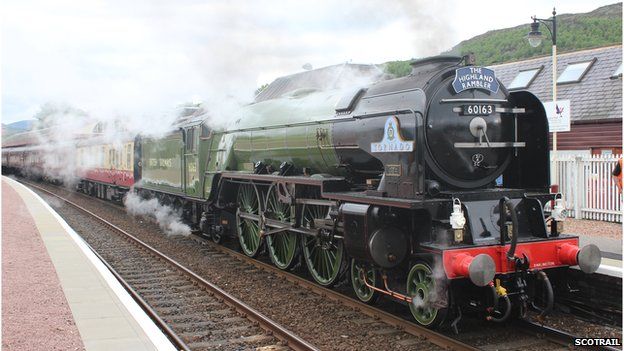 The first steam trains will travel along the new Borders Railway line in September, ScotRail has confirmed.

The 60009 Union of South Africa will haul the service between Edinburgh Waverley and Tweedbank on 10 September, just four days after the new railway opens.

It is one of six remaining LNER Class A4 steam locomotives and it was built in Doncaster in 1937.

The train will run through the Borders three days a week, for six weeks.

Mike Cantlay, the chairman of VisitScotland, said the steam trains would be an additional boost to tourism in the region.

He said: “The opening of the Borders Railway is a fantastic opportunity for Scottish tourism and the introduction of steam trains is excellent news.

“It is a chance for passengers to step back in time and enjoy the beautiful countryside on another level as these majestic locomotives make their way through Midlothian.

“The magical Scottish Borders is one of Scottish tourism’s greatest assets and I’m convinced the addition of steam trains will make our new railway one of Scotland’s most sought-after attractions. I for one cannot wait to enjoy this amazing experience.”

The ScotRail service has been introduced following the success of a similar scheme which operated between Inverness and Carlisle in June.

Transport Minister Derek Mackay said: “It’s fantastic to see these iconic trains back in operation, allowing so many people the opportunity to appreciate Scotland’s countryside and railways from a unique and very special point of view, and to see them running on the long-awaited Borders Railway will be a real jewel in the crown both for Scotland’s tourism and rail industries.

“There can be few railway journeys which match the outstanding scenery on this new route, and I look forward to it being extremely successful. Steam services running on the reopened Borders Railway really will recapture the golden age of Scottish rail travel.”