In the mid 1970s many interesting steam locomotives still ran in eastern European communist countries. Train photography in the Eastern Bloc was a problem as railways had strategic significance and westerners caught photographing them risked arrest, film confiscation and possible imprisonment.

So it was with trepidation that I and four other Australian railfans drove our campervan across the heavily fortified border into East Germany in October 1974. After two or three days of tentative photography at lineside spots as far from the public gaze as possible we headed for the Berlin to Dresden mainline where most of the high speed expresses were steam hauled.

Our First Encounter With The East German Military

An initial attempt to find a suitably inconspicuous photographic location was not encouraging. The campervan was stopped and turned around by Russian soldiers at a military post near the village of Zossen. The soldiers appeared to be guarding the entrance to a large military base. After putting plenty of distance between ourselves and the soldiers by a circuitous route we eventually reached the railway again south of the village of Baruth. As it was now too dark for photography we crossed the line using a forestry level crossing and drove a short distance into a pine forest to spend the night. Our sleep was interrupted several times by the roar of passing steam hauled expresses.

Next morning we moved the van back to the railway, remaining on the forest side of the level crossing to avoid being seen from the road on the other side. The other advantage of this arrangement was that the sun, if it were to emerge from the broken cloud cover, would be on our side of the line. We started preparing breakfast with cameras ready so we could rush out and photograph any trains that might pass.

We did not have to wait long; a rumbling roar heralded the approach of an express. It thundered past at a terrific speed behind 01.20 class pacific No. 01.2050 just as the first rays of sun began filtering through the clouds. The sight and sound of several hundred tons of train travelling in excess of 80mph (130km/h) is an experience never to be forgotten. We had our first photos of a high speed East German express but we almost lost them a few minutes later when a policeman riding a step through motor scooter puttered across the level crossing and started raving about train photography being verboten. We realised it was serious when he indicated that he wanted to take our film. Using a combination of sign language and a few words of German we were able to convince him we had not photographed the train as the sun was behind the clouds (fortunately, by this time it really was) and that there had not been enough light.

This rather confused him but he calmed down. One of our team, John, who had some German continued to talk to him while the rest of us returned to the camper van to finish eating breakfast. The copper took down John’s passport details then jumped back on his bike to leave. This was great timing as we could now hear a train approaching from the south and the sun had popped out from behind the clouds bathing the scene in beautiful morning glint lighting. But then disaster struck, the police bike would not start! The train was getting closer and it was now obvious that it was steam.

Finally the motor scooter’s puny motor spluttered into life and it’s rider approached the level crossing only to be halted by the automatic boom gates closing for the approaching express. Those of us still in the van looked at each and in silent agreement picked up our cameras and quietly climbed out of the rear door where, hidden from our Peoples Police tormenter by the campervan, pressed our camera shutters as one of the impressive 01.5 class pacifics, No. 01.0514, sped past on the north bound Meridien Express.

Figure 2 01.5 class 4-6-2 at speed between Golssen and Baruth with the north bound “Meridien” Dresden to Berlin express 5th October 1974

The One Full Sun East German Photo Of The Visit

With the surreptitious photo in the bag we climbed back into the van just as the copper finally crossed the level crossing and rode off. When John returned to the van himself a minute or two later our self satisfied grins must have told him what we had just done. He was not amused. He had been out there trying to placate the long arm of East German law while we had quite irresponsibly thumbed our noses at the police. Had the policeman turned around at the wrong moment we would all have been in deep trouble. He didn’t, however, and we got the photo and it accompanies this story.

Only five minutes later, another motor scooter bearing another green clad member of the Volkpolizei turned up. This guy was far more officious than his colleague and we only averted film confiscation and arrest by managing to convince him that we’d already had a visit from the law and that we’d provided passport details. The fact that we managed all this in very rudimentary German says more for our level of desperation than for our knowledge of that language.

I Lose My Film

Anyway after policeman number two departed we thought it was time we too should move on. Ironically some distance further down the line we were spotted by another copper who demanded we follow him. He led us to Elsterwerda station beside which was a loco shed with several locos simmering in the morning sun and he indicated we should photograph them. To say we were confused by East German police policies towards railway photography by now would be an understatement. Unfortunately most of us lost our photos at Elsterwerda shed during a real arrest and film confiscation incident a couple of days later in Poland. 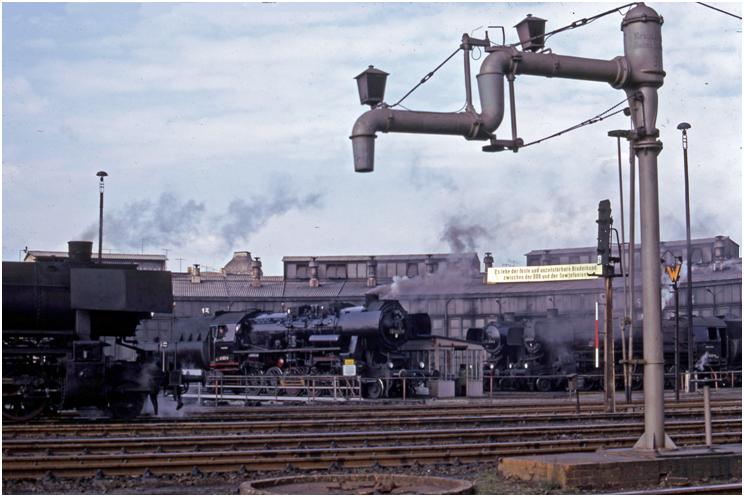