Our next stop on the trip was at Mao’s birthplace, a sacred shrine for the Chinese. This was interesting as year’s later, we visited Fidel Castro’s mountain hideout in Cuba. It had a similar feel to it.

I thought I would throw in one of the double QJs we saw at Louyang early to give you a taste for the steam action in this post.

We begin part 2 in Mao’s birthplace, Shaoyang. It is a delightful village, probably typical, if a little more sterile, of the thousands of villages that make up rural China. 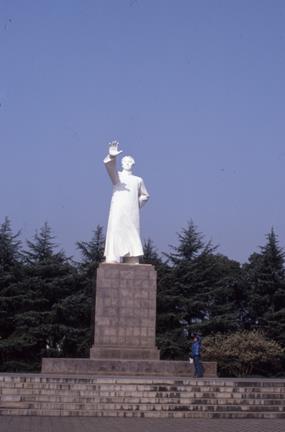 It was a real treat to visit this village as for the most part we were barred from leaving the big cities. For someone like me, who loves wandering around the countryside it was a difficult medicine to digest, and my attempts to break free often failed. The couple of hours here were really great and relaxing.

Mao came from humble beginnings in a small cottage in the village. As we walked around the area we saw people tilling the fields with traditional Chinese hoes. There was little mechanisation, except for the small tractors that never seemed to haul a plough. I believe that was so everyone would have a job. The average wage in the countryside was around $1 a day, but this went a long way. Everyone had enough rice to eat and a place to stay.

The farms were communal. Unlike Australia there are no fences, and ducks wandered everywhere. Private ownership was a concept that simply didn’t exist. Everything was common land worked by the collective. The village appeared very relaxed. It was a far cry from the huge cities. Naturally, there was no steam around here and the weather was perfect and sunny. Damn!

You can see from the photo how imposing the Chairman is. I am not sure what his position is in China now, as loyalties often change with regimes. The little figure beside the statue is me!

In some ways it is a real shame that the Chinese Government of the time were so paranoid about foreigners talking to their citizens that they tried to keep us apart. The official reason for not letting westerners visit many parts of the country was simply that the facilities were not there. They considered the accommodation for the Chinese would not be good enough for Westerners. I had a more cynical viewpoint. The government only wanted foreigners for their tourist bucks. Like other communist countries, the state did everything it could think of to extract the maximum amount of money from foreign tourists.

One other interesting phenomena I witnessed in Shaoyang was the local store. As I said, it was difficult to get exposure to normal Chinese life outside of major cities. Being there for such a long time, I did manage to get a glimpse of things from time to time.

The manager (the State owns everything) of this establishment sits high up in the store on a dias. From here he can watch everything going on and control his staff. You enter the shop and it is quite normal. Glass cases displaying the goods, and attentive Chinese women serving customers. I might add it was very different from the department stores in the cities. More on that later.

The sales clerk helps you pick what you wish to buy. In our case this was done by pointing. They then use an Abacus to add up the total and write that down. Fortunately, Chinese used western numbers or we would have been totally lost. Then they let the manager handle the money side.

If you look closely at the photo you will see that there are a series of wires spreading out from the manager’s position. These lead to all of the sales counters. When you make a purchase, a docket is written up and sent through a tube on the wire to the manager with your money. He works out the money, and then sends the tube back for you to receive your change.

This to me is a real insight into old China. I am sure that commerce was carried out in this way for many years. We all know the Abacus is legendary in China, and I am sure there were many shops using the wire and cylinder method of payment.

We Say Goodbye To Shoayang

After a couple of hours, we hopped on another train and headed towards Changsha. This town is famous for a mummy. This is no ordinary mummy like the Egyptian ones, but a 2100 year old Chinese woman so well preserved, you can see her skin. All of her organs are stored in jars around the room, and we were not allowed to take photos, because the flesh would degrade her quickly. If you ever visit China, I would recommend a visit to this to9wn. It is truly amazing and moving to actually see someone who lived over 2,000 years ago in a pretty good state of repair.

The final leg of this section is the run to Wuhan. It is a 358 km journey. For us it took 5 hours and 42 minutes. There is a reason. These days the line is serviced by bullet train and the journey is just 1 hour 25 minutes at an average speed of 252 kph. How things have changed!

Anyway, after two days of brilliant sunshine, I was itching to get at least one steam train shot in full sun. As we headed towards Wuhan, we stopped at a major town, probably Yueyang, although I can’t be sure. This was not on the official list as acceptable for westerners, but what the heck, I thought I would chance my arm.

I hopped off the train and headed north down the tracks. Pretty soon a freight came by with double QJs at the helm.

This was a busy main line and pretty soon another QJ appeared. Regrettably not far behind were railway officials who escorted us back to the station and put us on the next train north!

By now we were well aware that everyone in China was watching. After all, we did tend to stand out! Many areas we visited rarely saw a westerner, and the Chinese were paranoid about US imperialism to the point that they purchase US equipment from my company in Australia so they wouldn’t have to deal with the yanks. That got me a trip to the China Daily in Beijing.

I think you will agree that the last picture is a nice one, if not spectacular. We reached Wuhan without further incident. Still all the expresses were hauled by diesels. The next leg of the journey was from Wuhan to Luoyang, a distance of 703 kms. Unfortunately the express was diesel hauled. Luoyang is the site of the famous Longman Grottos, but I wasn’t there for that!

According to the latest information, the rail trip from Wuhan to Luoyang is now just over 5 hours, a distance of 580kms. It was obviously a lot slower back in 1985! We travelled 703 kms according to my notes. They must have straightened the tracks.

We arrived in Luoyang after a 13 ½ hour journey and headed for the local “Hotel Fan Dian” or friendship hotel. It was, of course, bitterly cold at that time of year. The average temperature for January is just 1 degree C. It seemed every journey led us to colder weather. This hotel was one of the old ones. It was large and looking very much run down. Luoyang is a major tourist spot in China, and at least the staff spoke English. There were very few westerners around at the time probably due to its remoteness. As I went to book in, I noticed an English gentleman asking questions. I knew he was English by his accent. Being a friendly Aussie, I asked him what brought him to that part of the world and he was rather cagy. Eventually he said he was on a “special interest” trip. I said I was too, and that I was here to photograph the trains. His eyes lit up and as it turned out he was wandering around China on his own in search of steam too. 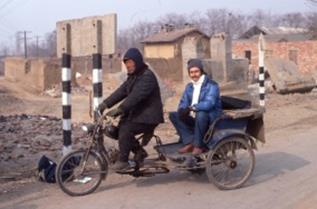 That night we had a banquet. There were at least 7 dishes on the table including some peanuts, rice and various dishes. It was all quite delicious. The next morning my new friend and I headed for the railway station and attempted to hire a cab to go to a nearby good photo spot. The cab driver would have none of it. He wasn’t going to risk heading out of town with 2 foreigners on board. There was a trishaw not far away, so we flagged it down and fortunately this driver was far more co-operative. We headed off down the line.

It was a slow trip through the suburbs past the tractors that were just hauling trailers, hoping that we wouldn’t encounter any police of military. We knew we would be sent back if anyone saw us, and we did rather stand out!

We picked our spot and had an hour or so with a procession of QJs.

The spot we had chosen was on a bank, so the engines worked their way along. As part of the parade, we witnessed 6 double headed QJs in 75 minutes. This was something I had never seen before!

There were so many trains, we managed to get the above shot with QJ passing QJ. You can see the China haze in this photo. For much of the country it is as close as it gets to sunny at that time of year. The condensation is due to the very cold weather. Yes, rail photography in China is a pretty miserable occupation in winter!

After a while of monotonous QJs, one after the other, we had enough of the cold and decided to return back into town. We arrived without incident, pretty pleased with ourselves.

It seems a little incredible now that there is virtually no mainline steam anywhere in the world, that we would get bored, just because there were thousands of QJs running all over the country. I can imagine a few years later it wouldn’t matter where you went in China, all you would see were QJs and JFs. Fortunately for me, it was not all like that back then.

The next leg of the journey was on Express 163 to Xian via Baoji. Our destination is one of the more touristy parts of China and home of the Terracotta Warriors.

We travelled 3 hours behind diesel, before we finally attached an RM to the train for the run to Xian. At that time all trains in and out of Xian were steam hauled. It was a 6 ½ hour trip behind steam

I didn’t take any log books while in China, but I did record some times. The RM reached sustained speeds of 100 kph. This is pretty good, considering the huge loads they hauled.

The next segment details my time in Xian and then on to Lanzhou, our furthest point west, located on the Yangtze River. As I recall, it was difficult to travel any further West as an individual in those days. For this part of the journey, I am afraid you will have to wait for a little while.

© 2020 Stories From The Days Of Steam.
Theme by MyThemeShop.
Powered by WishList Member - Membership Software