The rail line stretching from Worcester in the Western Cape of South Africa Eastwards to George and Montegu Pass traverses one of the most famous and scenic sections of South Africa. Back in 1975 when I travelled the route it was electric from Cape Town to Worcester and then steam trains from there to Oudtshoorn and onwards towards Port Elizabeth. 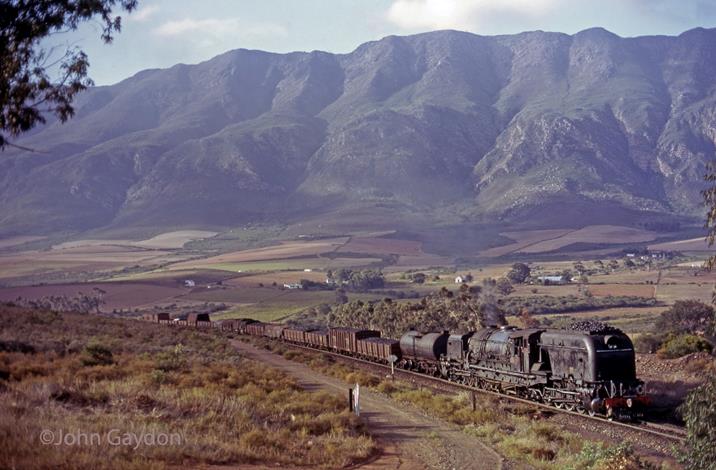 This GMAM Takes Advantage of Afternoon Lighting in This Classic Photo near Worcester.

After trolling through my photos of the area, I realise I need to split this story into several parts, simply to do the photography justice. This really is a beautiful part of the world, with long sweeping coastlines, rugged escarpments and spectacular desert country.

Coming from Johannesburg to Capetown via the main line, you reach Worcester after travelling through the Hex River Pass. This line has been electrified since 1961. At the time I was there, the section from De Aar to Beaufort West was diesel, so on the mainline, most of the crossing of the Karoo was by diesel.

The Garden Route Railway Line extends from Worcester through Riversdale and Voorbaai with an extension to Mossel Bay, To George. This is the section that is the subject of this pictorial story. I managed to ride behind steam trains over the garden route in late 1975 after my return from Mozambique. It was a memorable journey. I managed to clock up some 3,000 kms, mostly travelling behind steam. At that time there were very few places in the world where this was possible. The long, continuous steam ride began at Worcester.

The World Of The GMAM Steam Trains

Motive power between Worcester and Oudtshoorn at that time was in the form of GMAM Garrats. Lacking water capacity, they always came with a water wagon attached. These were the most modern of the South African Garratts, with the exception of the 2′ gauge NGG 16, used on the Donnybrook Umzinto line in Natal. The last of the NGG 16 was built in 1968, and the last GMAM entered service in 1958.

As can be seen from the above shot, this is a spectacular stretch of line, offering superb lighting, seaside photography and spectacular mountain backdrops.

I was travelling at the time with Kerry James from New Zealand. I met Kerry on my first overseas trip to New Zealand. He was fireman on the Kingston Flyer steam trains, which at that time had just been restarted. This train still operates today. 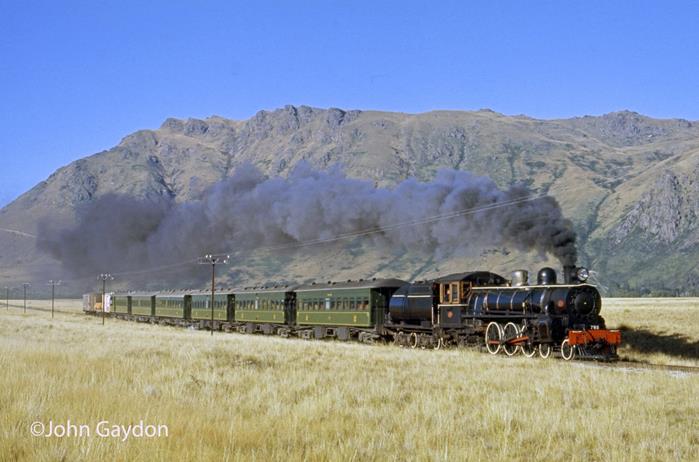 The Kingston Flyer In 1972 With Kerry James As Fireman

My other compatriot was Mike Grainger from Yorkshire, England who I was to share my Mozambique adventure with. We covered a lot of ground in the 5 weeks we were on the road.

A special spot on the trip was the Gourits River bridge. It is 75 meters high. This is one of the more impressive Railway Bridges in South Africa. We were lucky to be there when it still had steam trains crossing.

A major town on the route is Riversdale. It is located in a valley and was one of the watering points on the Garden Route. After leaving the town, the line has a sharp curve and in the early morning air, the stillness could leave a steam trail exactly following the path of the steam trains. 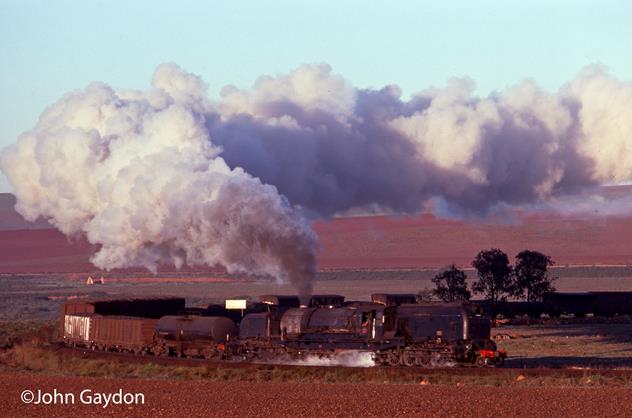 A Perfect Steam Trail From An Early Morning Departure From Riversdale

It really was worth getting up in that crisp autumn air for some spectacular lighting. Here the whole side of the Garratt reflects the golden light of the morning sun.

The Line Hugs The Coastline

From here the scenery changes around Vorbaai, where a branch splits off to Mossel Bay. I spotted a great signpost pointing to the loco depot. I included it here for interest.

The passenger train takes a detour here, snaking along the waterfront with spectacular views. I managed to get a shot looking across the water. 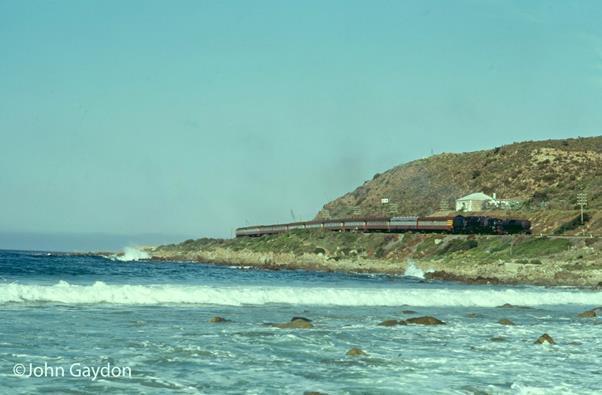 From here to George, the line follows the coastline, and the road travels high on the cliffs. This provided many great photo opportunities for shots with the surf and steam, a great combination most Railfans would love to see and photograph. 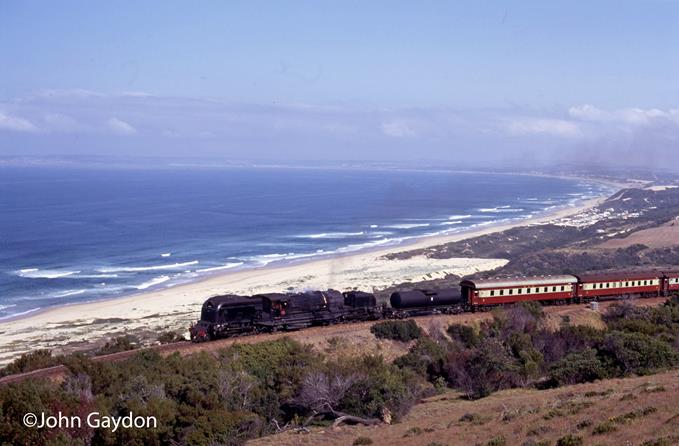 As you can see, the beaches of South Africa are beautiful white sand surfing venues. These are some of the most popular surfing beaches around, including Herolds Bay and Victoria Bay. It is worth a visit to South Africa just to see this area.

At George, the main line heads north away from the coast, crossing the escarpment. We spent 3 days camped on Montague pass, keeping the baboons away from our food supply was a challenge. There are no roads here, so all of the photos of steam trains were taken by tramping large distances up and down the pass. 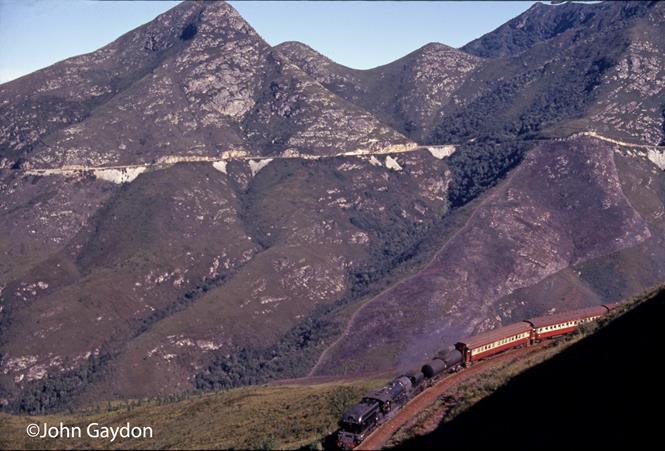 A Taste Of The Splendour Of Montagu Pass

The other line from George heads East to Knysna past some other great surfing spots. This line was operated as a tourist line for many years, and there are many photos of steam trains taken I the area. I selected a couple of nice ones from our visit back in 1975, when there was a regular mixed hauled by a 24 class.

I know the loco seems insignificant against the magnificence of the area. At dusk that night I recorded a perfect reflection as the train sped on the final sprint into Knysna. 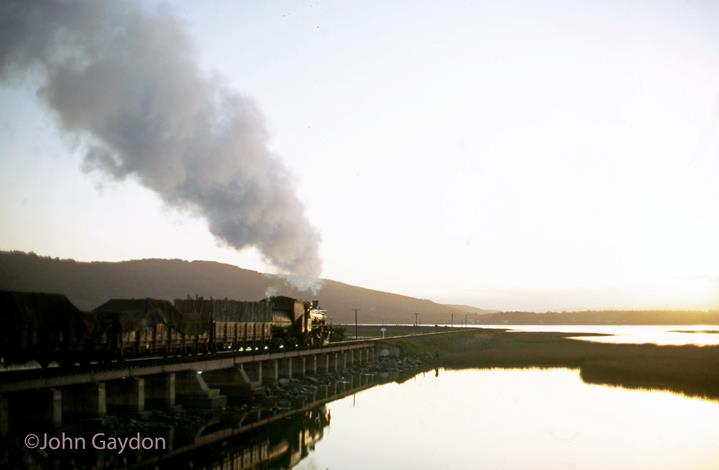 Watch out for some more articles on Montagu Pass, and Oudtshoorn to Kilplaat, two other great stretches of railway line in the days when steam trains ruled.