While researching locomotives with the largest driving wheels, there was only one contender on the 3’6″ “Cape” gauge, the preferred rail width in Southern Africa.

Of course, we are talking about the mighty 16E, which I only saw mounted on a plinth outside Bloemfontein Station.

These magnificent machines were built to haul the crack Union Limited  across the Karoo desert. In testing one of them reached 90 mph, although the road speed was set at 70 mph. 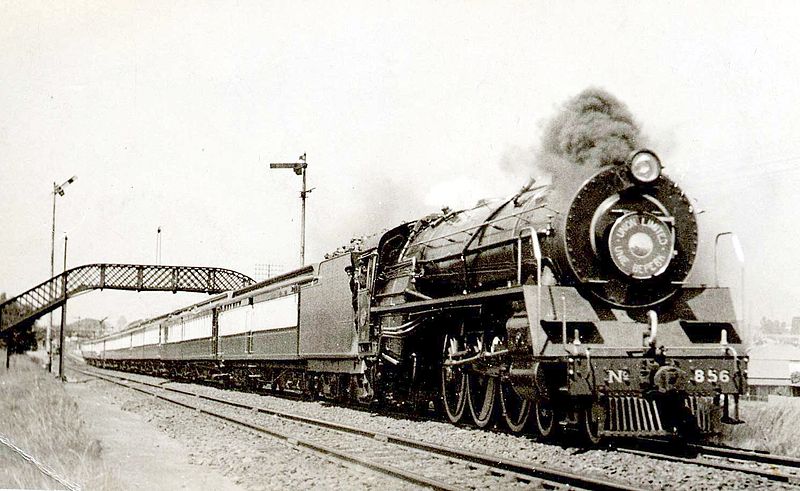 The Union Limited eventually morphed into the Blue Train, one of the most famous luxury trains in the world right up to the present. In 1969, 2 x 16E’s hauled the Blue Train from Johannesburg to commemorate the 30th Anniversary. 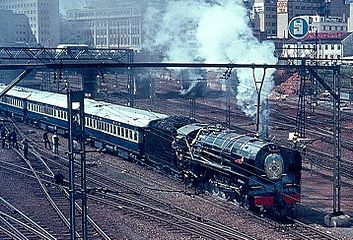 Here is one of the 16E’s leaving Johannesburg on its way to Cape Town on the 1969 trip.

Later the 16E’s would haul the Trans Karoo and Orange Express trains, and continued until 1972, when they were all withdrawn from service due to the trains becoming so long, that the 16E simply could no longer handle the load!

US Photographer, Ron Wright, managed to photograph these in regular service. He gave me permission to share these photos with my readers.

With a driving wheel diameter of 6′, they were larger than the NSW 38 class! Across the Karoo desert, they regularly clocked 120 kph on large Express Passenger trains.

I visited the country in 1975 and the best I could do was this shot on Christmas Eve.

It was a real treat to find these shots from Ron on his website.

16E numbers 857 and 858 were returned to service in the late 1970s, and ran several tour trains. Somehow I managed to be there in the short period where no 16E’s were running. I was told in later years they worked freights and were not in very good condition.

Here are a couple more of Ron’s photos of 16E’s. He takes an excellent photo.